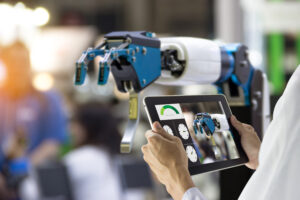 Floor-cleaning and microbe-zapping disinfecting robots were introduced in hospitals, supermarkets and other environments.

Some enterprises found that, given the new emphasis on hygiene and social distancing, robotic operations offered a marketing advantage. The American fast food chain White Castle began using hamburger-cooking robots in an effort to create “an avenue for reduced human contact with food during the cooking process”.

With the worst days of the pandemic hopefully now behind us, the jobs story has turned out to be unexpectedly complicated. While overall unemployment rates remain elevated, both the US and the UK are experiencing widespread worker shortages, focused especially in those occupations that tend to offer gruelling work conditions and relatively low pay. Even as a quarter of a million of British workers who held jobs in 2019 remain unemployed, job vacancies are up 20% from pre-pandemic levels as employers struggle to fill many positions. The reasons behind the worker shortages are not entirely clear.

A common assumption is that extended payments to furloughed workers allowed people to remain out of the workforce. However, evidence from a number of US states that moved to discontinue unemployment benefits early suggests that the extended payments may not have played a major role. Many workers may have simply reassessed their willingness to do difficult and often unrewarding jobs in return for low pay.

In the UK, Brexit has greatly exacerbated the situation. At least 200,000 EU nationals, primarily from eastern Europe, who once filled roles in areas such as agriculture, transportation and logistics, have left the country and may never return.

All of this has created a powerful incentive for businesses to invest in automation as a way to adapt to the worker shortage. As British farms confront the absence of seasonal workers who once flooded in from eastern Europe, interest in agricultural robots is growing.

The UK-based startup Small Robot Company, for example, has developed two robots capable of killing weeds in wheat fields while cutting down dramatically on the use of chemical pesticides. The first robot autonomously prowls a wheat field, and with precision and patience that no human could match analyses each individual wheat plant using several cameras, mapping the exact locations where weeds are beginning to encroach. Once this data has been collected, a second, somewhat frightening, five-armed robot follows, killing the weeds by administering a powerful electric shock.

Another startup company, Xihelm, which received venture funding from the UK government in 2018, has built a robot capable of harvesting fragile fruits and vegetables in greenhouses. The robot can, for example, carefully pick tomatoes after using artificial intelligence to identify only the ripest fruit. In the US, where the worker shortage has hit the restaurant industry especially hard, the White Castle chain has introduced french fry automation to work alongside its new hamburger robots, while the national restaurant chain Sweetgreen acquired a startup company that provides robotic kitchen technology. McDonald’s restaurants in the Chicago area are experimenting with an artificial intelligence-powered voice system that can process customer orders in drive-throughs.

There can be no doubt that the pandemic and the associated worker shortage are accelerating the drive toward deploying artificial intelligence, robotics and other forms of automation. In the UK, the trend is being further amplified as Brexit’s impact on the workforce becomes evident.

However, the reality is that most of these technologies are unlikely to arrive in time to offer a solution to the immediate challenges faced by employers. Xihelm’s tomato-picking robot, for example, remains in the testing phase; the machines are not yet generally available for purchase. Some of the most critical worker shortages the UK are in transportation and logistics. By one estimate, the country is currently short of at least 100,000 truck drivers. As has been widely publicised, this has led to shortages of everything from petrol to McDonald’s milkshakes. No robots will be coming to the rescue in the near future.

While a number of startup companies in Silicon Valley and elsewhere are working on self-driving trucks, the technology remains at several years away from commercial viability. Add time for governments to craft the necessary regulations or simply to get the public to accept the idea of fully loaded trucks navigating local roads without a driver at the wheel and the wait could easily be much longer.

Over the course of a decade or more, however, the overall impact of artificial intelligence and robotics on the job market is likely to be significant and in some specific areas the technologies may lead to dramatic change within the next few years. And many workers will soon confront the reality that the encroachment of automation technology will not be limited to the often low-paying and less desirable occupations where worker shortages are currently concentrated. Indeed, many of the jobs that employers are struggling to fill may prove to be highly resistant to automation. At the same time, better-paying positions that workers definitely want to retain will be squarely in the sights as AI and robotics continue their relentless advance.

Consider, for example, the distribution centres run by Amazon or the online grocery retailer Ocado. As online shopping has accelerated, these warehouses have become an employment bright spot, providing jobs for many thousands of workers. Less than a decade ago, facilities of this kind would have been animated by hundreds of workers continuously roving between tall shelves containing thousands of different items.

The workers would have included “stowers” tasked with taking newly arrived inventory and storing it on shelves and “pickers” responsible for retrieving items in order to fulfil customer orders. The activity would have been a continuous mad scramble, perhaps resembling an especially disordered anthill, in which a typical worker might trek a dozen or more miles over the course of a single shift.

In today’s most advanced distribution centres, this bustling motion has become almost a mirror image of itself. It is now the workers who remain stationary – doing the picking and stowing – while the inventory shelves speed about, conveyed between destinations by fully autonomous robots. Amazon now operates more than 200,000 of these robots at its distribution centres worldwide, while Ocado employs more than 1,000 at a single facility in Andover in Hampshire.

Companies such as Amazon and Ocado continue to employ massive human workforces largely because the robots are – so far – unable to perform the picking and stowing operations that require human-level visual perception and dexterity. This is certain to change, however.

Both companies, as well as number of well-funded startups, are working on building more dexterous robots. Indeed, Amazon’s CEO, Jeff Bezos, speaking at a conference in 2019, said: “I think [robotic] grasping is going to be a solved problem in the next 10 years.” In other words, a great many of the hundreds of thousands of workers now employed in these facilities are likely to become redundant in the relatively near future. And as robots advance, they will likewise be deployed ever more frequently in restaurants, supermarkets and other environments.

More educated white-collar workers will quickly discover that they are by no means exempt from the rise of AI. Any job that involves the relatively routine analysis or manipulation of information is likely to fall in whole or in part to software automation. Some of the world’s largest media organisations, for example, already use AI systems that automatically generate news articles, while intelligent legal algorithms analyse contracts and predict the outcome of litigation.

AI is even beginning to demonstrate a talent for routine computer programming. In many cases, knowledge work will prove to be easier and less expensive to automate than lower-paid work that requires physical manipulation. When the job is focused purely on working with information, there is no requirement for an expensive mechanical robot and no need to surmount the difficult technical challenges involved in replicating human dexterity or mobility.

In the long run, as advancing technology shapes our post-pandemic future, the workforce will increasingly be divided into winners and losers. The losers will be those who focus largely on routine, predictable tasks, regardless of whether these activities are physical or intellectual in nature, and often independent of education level.

The winners are likely to fall into one of three general groups.

First, skilled trade workers, such as plumbers and electricians, who do work that requires dexterity, mobility and problem-solving ability in highly unpredictable settings. The same is true for a care worker who assists an elderly person with his or her daily needs. This type of work is far beyond the capability of any existing robot and these jobs will remain safe for the foreseeable future. Second, those workers whose occupations require the development of deep, sophisticated relationships with other people will be relatively safe.

This might include caring roles, such as nursing, or business or educational occupations that require complex human interactions. While AI is making progress in this arena – for example, there are already chatbots that can provide rudimentary mental health support – it is likely to be a long time before machines can form truly meaningful relationships with humans.

The final category includes intellectual work that is creative or activities that are otherwise genuinely non-routine and unpredictable in nature. For these workers, artificial intelligence will be likely to amplify, rather than replace, their efforts. Within many professions, a winner-take-all scenario might unfold; the most creative individuals will rise to the top, while those focused on more routine activities will face a growing threat from automation.

The best advice for individuals is to transition from routine, predictable work and towards one of these winning categories. There are real questions, however, about the viability of this advice when applied to society as a whole. Historically, advancing technology has tended to drive most workers from routine work in one sector to routine work in another. As agriculture became mechanised, workers moved from farms to factories, but they continued to do routine work. Later, workers moved to routine jobs in the service sector. The rise of artificial intelligence will require an unprecedented transition in which a large fraction of the workforce will have to find and adapt to roles that are genuinely non-routine. It is unclear whether a sufficient number of these jobs will be created – and, even if they are, many workers will likely lack the inherent talents and personality traits required to take on creative or relationship-based roles.

Designing a society that can adapt to the rise of artificial intelligence and allow everyone to thrive as these changes unfold is likely to be one of our most significant challenges in the coming years and decades. It will require an emphasis on retraining and education for those workers who can realistically undertake the necessary transition, as well as an improved safety net – and perhaps an entirely new social contract – for those who will inevitably be left behind.

Are robots stealing our jobs or solving labour shortages?