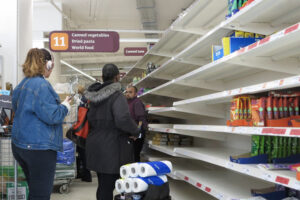 The paralysing impact of staffing and supply chain shortages on British businesses has been laid bare by research showing a third of mid-size firms were forced to scale back their offering to customers even before the fuel crisis hit.

More than 34 per cent of businesses said they had already reduced their product lines or services to manage staff or stock shortages by mid-September, according to a survey for BDO, the accountancy firm. A further 31 per cent of companies said that they would have to do so “unless the situation changes within the month”.

Many businesses are expected to have seen challenges intensify since the survey was conducted between September 9 and 15, with the onset of fuel shortages prompted by panic buying that started ten days ago.

The research will also set off further alarm bells about inflation with almost one in three mid-sized businesses saying they expected to have to put up prices of their products or services in the next three to six months, and almost a fifth saying they were increasing wages to try to attract staff.

Ed Dwan, a partner at BDO, said: “Brexit, global supply chain issues and the long tail of Covid-19 has created a perfect storm for UK businesses. After navigating the challenges of the pandemic and hoping for some respite, businesses have found themselves facing more major disruption, with those across almost all sectors reporting staff shortages.”

He added: “The recent fuel shortage is another addition to a long list of headaches for business and will have only made it harder for them to fill their shelves and offer consumers a full range of services.”

Serious challenges with supply chains and staffing have emerged across the economy with many foreign workers returning home as a result of the pandemic and post-Brexit policies.

Britain is estimated to be lacking 100,000 heavy goods vehicle drivers because of a combination of factors including drivers returning to Europe, retirements from an ageing workforce and Covid-19 restrictions disrupting testing and training of new recruits.

The shortage has had knock-on effects on the supply of a range of products by numerous big companies. Tesco has warned of empty supermarket shelves at Christmas, while a warning from BP that it was having to ration petrol deliveries to some service stations late last month because of a shortage of drivers triggered huge queues by anxious motorists and widespread fuel shortages.

Shares in AO World, the online white goods retailer, fell heavily after it warned of supply chain woes on Friday.

The hospitality industry is also among those severely affected by staffing shortages with many venues forced to change opening hours as they struggle to recruit enough staff to meet demand as the economy reopens. JD Wetherspoon, the pub chain, admitted last week that it was finding it difficult to recruit in some areas.

The shortages across the economy raise the prospect of rising prices and wages that threaten to further push up inflation which is already rising at a record pace. The consumer prices index rose by 3.2 per cent in the year to August, the highest rate in nine years, and a record jump from 2 per cent in July.

Although policymakers have blamed temporary factors, such as the recovery in restaurant and cafe prices following the Eat Out to Help Out scheme last year, there are fears of more lasting inflation driven by an unprecedented spike in wholesale gas costs that is pushing up energy bills for consumers and industry alike.

BDO, an accountancy firm with 18 offices and 6,000 employees in the UK, commissions a bi-monthly survey of mid-sized businesses. The research surveyed 500 businesses with annual revenues of between GBP10 million and GBP300 million.

No end in sight for labor shortages as U.S. companies fight high costs

Prioritising procedures: Why your start-up needs systems and processes

Biden to announce up to $102 million in funding for U.S.-ASEAN partnership